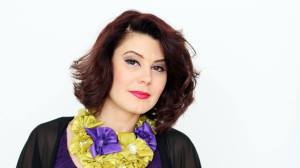 About the Author Anca Mihaela Bruma

Educator, lecturer, performance poet, eclectic thinker, mentor with staunch multi-cultural mindset and entrepreneurial attitude, Anca Mihaela Bruma considers herself a global citizen, having lived in four continents. Her eclecticism can be seen in her intertwined studies, she pursued: a Bachelor of Arts (Romania) and a Master of Business Administration (Australia).

The author labels her own writings as being “mystically sensual”, a tool and path for women to claim their own inner feminine powers. She uses poetics as a form of literary education, self-discovery and social engagement.

Through her writings she surpasses what seems to be the limitations of the human but emphasizing the essence of the woman, of the Goddess. The main theme, Love, is basically presented as a transformative experience in life, the energizing force in the universe and empowering the creative feminine.

When she writes she sees a painting in front of her eyes, using symbolism and allegory in order to capture the infinite intelligence gathering the reflections of truth with a strong mystic sense of the boundless, of the opening out of the world of our normal finite expressions into the transcendental. Like an architect of a language she builds a language within a language, a world within a world, using vivid, sometimes surreal, imagery, giving her poetry a feeling of transcendence.

Her writings reflect her spiritual autobiography, with depictions of hidden reality, with no limitations of space and time, – a quantum view of Existence. Currently, she sees her writings as a practice of being present within the language, a paradigm of living encoded within the message itself, a poetic consciousness with a spherical view of Life and Love. It is related to the realization of the greater self beyond the mundane and established laws of the society: as an expression of both the rational and the intuitive, in the concise poetic form, increasing one’s mindfulness with expanded, even unfamiliar meanings.

Anca sees her writing as an act of Creation, in which the pain transcends into Beauty, allowing a profound healing process to take place. She, as a poet, alchemically heals herself through this process and subsequently heals all who are touched by her writings. She considers that is the main purpose of ART, to Heal and Elevate the minds and souls of the readers!

Bend the knees of the Moon

to undress the Cosmos,

and torch my Heart

along the flaming grass.

to denude the World

Then…. Only then it is possible!

To become a No-Body among some bodies.

where… hellos transform into goodbyes,

and… the ritual commences.

I do not know what to regret anymore…

that I cannot reach you through our memories,

that an insane song cannot touch your soul,

or that you reversed yourself on the other side of Life?!…

I watched how spring drained from us

and not even a curved second could see anymore

the Miracle from us!…

Not even my own flying is vertical anymore

and I remained with my wings sealed

running barefoot on the shells of Time

on the look for that plenary Love

which you had promised along a sunset…

You stole the jewels of Time from beneath my eyelids…

just one white night struggled to reach the cloud’s temple

and I do not have shores to reach…. anymore…

I just got lost in the morning known by nobody!…

In this timeless ethereality
where silences build
converted assonances
and gravitational elapses,
I breath your unspoken space
within my pollinated reflections…

Intoxicated violets hide
in the sweetness of our kiss!…