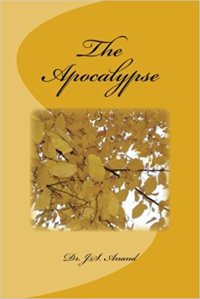 THE GREATEST EVER RESCUE OPERATION TRYING TO SAVE THE SOUL, TRYING TO SALVAGE THE HUMAN FIGURE; IN A MARATHON EFFORT TO FIX THE CAUSES WHICH SET THE BELLS RINGING AND INVITE THE APOCALYPSE: A CLARION CALL from the author of BLISS: THE ULTIMATE MAGIC: AND ‘BEYOND LIFE, BEYOND DEATH’…. MOVE BEYOND RELIGION. A REMINDER THAT ALL IS NOT LOST. THAT WE STILL HAVE OUR SOUL TO LOSE, OR TO SAVE. THE RESCUE OPERATIONS BEGIN, HERE AND NOW. RELIGION IS A MASK. THE FACE NO BODY KNOWS. THE MASK HAS DEVELOPED POCK-MARKS. WHERE IS THE SAVIOUR? HIMSELF IN NEED OF BEING SAVED? FROM MAN: WHO CAN TURN THE SOUL OUT, AND KEEP THE HIDE HANGING…. CRITICSPEAK: “Most powerful work of post-modern world, marooned in the faithless oceans of murky selfhood, and shorn of all glory, individual as well as collective..” Principal N.S. Tasneem, Winner of Literary Academy Award and Former Fellow, Indian Institute of Adv. Studies, Shimla. “Only book in contemporary history claiming spiritual kinship and affinity with classics like Khalil Gibran’s ‘The Prophet’, Milton’s ‘Paradise Lost’ and T.S. Eliot’s ‘The Wasteland’ Dr. Roghayeh Farsi [Researcher and Professor at Neyshabur University, Iran.] THE WORLD LIVES BY ITS SYMBOLS; HENCE, IN A SHAMBLES;;;;; FOREGROUNDING: Religion is a mask which has become the face. The face nobody knows but the mask has developed pock-marks. With the glow of the essential clouded, the society remains in ceaseless eclipse. Man’s eyes are enough to light his being, but the darkness of vision doubled with the loss of divine vision has turned the world of man into a darkling planet, a graveyard and man, into a lost soul. In this desert of despair, hope shines beyond the horizon but like a mirage, only to make man tumble from one hope to another. What makes this journey a fearful experience? Was man destined to live through this nightmare? Why, on this beautiful earth, is human soul alone languishing for a breath of fresh air? Why is man alone lonely and forlorn? Where is the mad rush headed for? What are these cries? What is this blood? Whose are these arms? Are we man or militants? Where is sense? Where is sensibility? Where is culture? Where is civilization? Man’ is not a fit description for this ‘masked’ creature. Brutes are more sensible, humane, satisfied, God-fearing and subdued. What makes this man turn mad? Is it mankind? Or madkind, to be more precise? Hasn’t contemporary history played havoc with any sense that can be made out of the word ‘Religion’? If hatred is what it teaches and bloodshed, what it preaches, we must go beyond this word and try to look at the reality afresh. What somebody has said is, no doubt, truth but what are we making [or unmaking] of that truth and the truth left unsaid? It is surprising to see that each religion preaches love, brotherhood, kindness and humanity. Are these things to be practiced only within and by the followers of a particular religion? Has kindness nothing to do beyond the limits of that religion? Is the concept of brotherhood limited to a particular set of people? Who are those lying outside the charmed circle of our religions, Friends or Foes? Enemies- if we go by the prescriptions which have come into display. Love for forms is the soul of the religious practitioner and politics has vitiated the veins which now can’t allow the free flow of love for mankind. What turns man mad? What turns him blind? What isolates him? What turns him into a killer? – Isn’t it the maddening passion miscalled ‘religion’ or better, ‘religionism’? This book makes an attempt to go beyond religion, look at the truth afresh, remove the mask and see with an unclouded vision at essential reality. Call it ESSENTIALISM, it is an attempt to redefine man, reassert humanism and re-emphasize the relationship between man and God – minus the formalities.
THIS WORK IS MEANT FOR THOSE WHO BELIEVE IN THE COMMON DESTINY OF MANKIND
Product details
Paperback: 132 pages
Publisher: CreateSpace Independent Publishing Platform (3 July 2013)
Language: English
ISBN-10: 1490521321
ISBN-13: 978-1490521329
Product Dimensions: 15.2 x 0.8 x 22.9 cm
Average Customer Review:Be the first to review this item
Amazon Bestsellers Rank: #47,848 in Books (See Top 100 in Books)
#407 in Books > Religion > Religious Studies > Theology & Philosophy of Religion
#844 in Books > Society & Social Sciences > Philosophy
#4148 in Books > Textbooks > Humanities

Dr. Jernail. S. Anand
About the Author
Dr. J.S. Anand’s latest work of non-fiction, ‘The Apocalypse’ can easily be called his masterpiece. After Bliss: The Ultimate Magic, and ‘I Belong to you’, this is author’s third work dedicated to EXISTENTIAL SPIRITUALITY. Dr. Anand, in ‘The Apocalypse’, re-draws the spiritual blue print for the human soul. For him, the hope lies in the subliminal aspects of religion and faith which have still not been debauched by human lust and degraded passions of mankind, and this passion for the sublime turns this book into an apocalyptic work, which can be classed with Khalil Gibran’s ‘The Prophet’, Miltion’s ‘Paradise Lost’, T.S. Eliot’s prophetici vision in ‘The Waste Land’. Dr J.S. Anand has authored best sellers like ‘Beyond Life Beyond Death’ and ‘Bliss: the ultimate magic’, which is being translated into Persian in Iran, He is a proponent of existential spirituality, which sets him apart from other mystics. Principal N.S.Tasneem remarks that “Dr. Anand is a wizard of words, his command over English language and his word play makes the reading of his works a highly enjoyable experience, as it as with the prose of James Joyce.” Dr. Som P. Ranchan describes Anand as ‘an existential spiritualist’ whose poetic prowess is simply amazing. Born on 15 January 1955 at village Longowal [Punjab Province, India]. Anand was educated at his village school, and then, for his graduation, he joined Govt. College, Ludhiana. Dr. J.S. Anand secured 2nd position in the Punjabi Univ. Patiala, in M.A. English Literature, and he was conferred the degree of Doctor of Philosophy by Panjab University, Chandigarh, in 2000 for his work on Mysticism in the Poetry of Walt Whitman and Prof. Puran Singh, an Indian mystic poet. After having served as Lecturer in English at GGN Khalsa College, Ludhiana, Guru Nanak College, Killianwali [Muktsar], Dr. Anand joined DAV College, Bathinda, in 2000 and in 2004, he was elevated as Principal, a position he is still holding. Dr. Anand started his writing career in 1985 with his first book, ‘Confessions of a Corpse’ and till date, he has authored 24 books of English poetry, fiction, non-fiction, and spirituality.. Dr. Anand has published 8 volumes of poetry in his mother tongue, Punjabi also, and his writing is known for its philosophical depth.