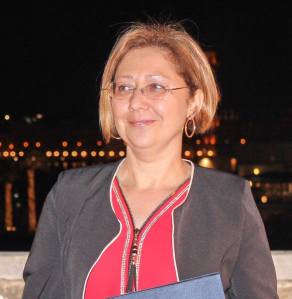 Poems by Claudia PICCINNO
http://ourpoetryarchive.blogspot.be/2017/08/claudia-piccinno.html
She was born in Lecce in 1970, but she moved very young in the north of Italy where she currently lives and where she teaches in a primary school. Operating in more than seventy anthologies, she’s a former member of the jury in many national and international literary prizes. She has published. “La sfinge e il pierrot”, Aletti Editore, 2011, “Potando l’euforbia” in Transiti Diversi, Rupe Mutevole Edizioni, 2012. “Il soffitto, cortometraggi d’altrove”, La Lettera Scarlatta Edizioni, 2013. With english version also “Il soffitto, cortometraggi d’altrove” La Lettera Scarlatta Edizioni maggio 2014- in serbian “Tabahnha” ed.Majdah luglio 2014. “Ragnatele Cremisi”- La Lettera Scarlatta Edizioni, settembre 2015. Tavan Baska Yerlerdeki Kisa Filmier,Artshop, Istanbul 2016, Italian poet, she is author foreground with effect in June 2015 in the World Group Pentasi B, and In Oup archives international since May 2016, she works to promote poetry based on respect and appreciation of differences. Scholastic referent land for education at reading. She has received awards in major national and international competitions of poetry, including an honorable mention in the Paris 1st Word Literary Prize and a 3rd prize in Lugano, Switzerland, 3rd prize in Albania; She has been the first italian poetess to be awarded with The Stelae of Rosetta, World Literary Prize in Istanbul on November 2016. She will be conferred with the most prestigious award “World icon for peace” for Wip in Ondo city, Nigeria, on April 2017 . Her poem “In Blue” is played on a majolica stele posted on the seafront in Santa Caterina di Nardo (Le). Last June 2016, she was art director in an art & poetry international exhibition called June in Italy. She is italian editor for the international literary magazine Rosetta World Literatura in Turkey and for Atunis Magazine in Albania. She has also written numerous reviews and critical essays or prefaces about other poets ‘books. She has translated from English into Italian lots of authors.
WASTELANDS
Wastelands
in the unspoken decision,
in the crowded expanses
in the shown derision.
Be wary of the loving utterances.
Bow down to my ravings.
Read every accent
as if it was gospel
and do not be afraid of the baleful wrath
because it is more honest
than the repeated flattery,
than the silence that falls when you arrive,
then the unsafe desire to appear.
Wastelands invoke oblivion.
Could a source gushing
absinthe drops mixed with morphine
and could lull the winds that shake memories.
A breeze that calms or a tornado that awake itself
however the sun is ready to heat
these debordate lands
these expanses stressed
by the storm of madness
by the indolence of rationality
by the envy of the losers.
At the dawn of a new day
I will wait for you
but the path will already be filled
with fresh sprouts to perfume
these my wastelands
that will bloom in green meadows inside me.
IMAGINATIVE HEIR OF PYTHAGORAS
Life tattooed me with numbers
On the left side of the heart.
I will resume them to make pure singing
Which cancels the calculations of giving and having
And cancel the divisions with the rest of three.
It was the third to be unharmed
By sums and subtractions.
Those three who did not want it
Grant equality
In the comparison of other opinions.
Aridity prevailed in counting
And the wrath of the for was kindled.
I am for
imaginative heir of Pythagoras,
I do not like the profits, nor the dividend,
I was patented to divulge
Love multiples.
NAWAL, THE QUEEN OF THE PIER
They call her the angel of illegal migrants.
She supervises on the landfall of adults and children.
She warns the coastguard before the storm is raging.
She tells migrants to watch their backs
from those looking for laborers
pretending to be saints.
Nawal is thin and beautiful among all her sisters,
the night helmsmen are afraid of her,
daytime patrons avoid her.
Nawal has a headkerchief on her head
and a very grievous competence.
She feeds and rigs out the brothers of the sea,
urging them not to stumble in evil.
Nawal is tiny and she has the witty expression,
a project in her mind and no fear in her heart.
Nawal is the queen of the pier,
She protects them all by deceit and malice.