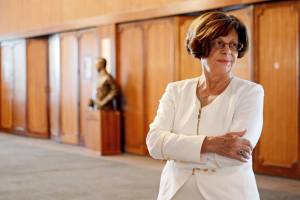 Katica Kulavkova (Veles, Macedonia, 21.12.1951) is a member of the Macedonian Academy of Sciences and Art (since 2003), a member of the European Academy of Sciences and Arts (Salzburg, since 2014) and Vice President of PEN International (since 2008). She lives in Skopje (R. of Macedonia). She was working as a professor of Theory of Literature, Literary Hermeneutics and Creative Writing at the University of Skopje. Her first book of poems appeared in 1975. Since then she has published more than thirty books of poetry (in Macedonian and in many translations), as well as two collections of short stories, one play, and approximately forty other books as both author and editor. She has received numerous Macedonian literary awards.

for Blessed Teresa of Calcutta

Katica Kulavkova’s haikus are very good even in their English translation: what is important are their ideas and the little surprises they give the reader. Needless to say, they are more perfect in their original, in the Macedonian language, if we consider them formally, though this is a question of syllabic work, which is different in every language. I know this well, not only because I have published several translations, but also because I publish in the World anthology of Haiku every year and I see the different syllabic problems in different languages. the same problems emerged in the book I wrote with Ban’ Ya Natsuishi (Japan) in four languages, which could be a matter of study in the field of translation studies. take attention, the same thing happens when a good Japanese author of haiku (Ban’ Ya is a great example) publishes translations of his poems. I am saying this in order to confirm my view that Katica Kulavkova wrote a very good collection of haiku poems, and I am very happy she did so.

Born in the land

of the Great Mother.

You left a piece of yourself

You pieced yourself together.

You need a new home

From Skopje to Calcutta

A road of mercy.

When hope is pointless,

there comes a time

for solace. An end.

They had no home

to live in. They had

a home to die in.

You chose the Way

and God chose – You.

Both chose carefully. By merit.

all that we are not!

If we are happy

Translated in English by Igor Popovski