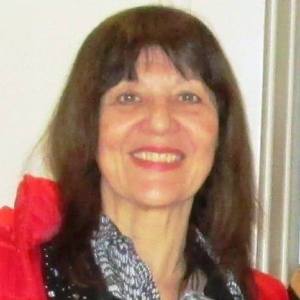 María Cristina Azcona
Blog: http://www.mcrisazcona.wordpress.com
Buenos Aires city, Argentina, April 5, 1952
TITLES
Educational Psychologist by USAL University of Buenos Aires, 1975
Family counselor by the Navarra University , Navarra, Spain, 1999
Normal National Magister, by Mallinckrodt College, Martinez, Bs. As.
Senior English Teacher, English Cultural Academy, Olivos, Bs. As.
ACTIVITIES
Azcona works as a freelance Educational Therapist and family advisor, psychotherapist of children, marriages and families and forensic expert in, accident victims.
She also works as a freelance translator English{Spanish and Spanish-English.
Also she acts voluntarily as president, deputy president, representative, co-founder and committee member at various NGOs worldwide, with the objective to spread peace thoughts worldwide through art and literature.
Also acts as writer, editor, poet and literary critic, in Spanish and also in English, with wide recognition, diffusion and publication, nationally and internationally.
In 2005 she has been a contributor researcher to UNESCO-EOLSS Encyclopedia on the topics Education for Peace and Peace Literature and has received numerous awards concerning this topic and around bilingual literature for peace in both Spanish and English languages respectively in India, Argentina, Colombia, Spain, USA, among other countries. For example in 1998, she won First Prize in the poetry contest by the Academic Circle of Argentinean Writers and finalist in many contests of poetry by different literary institutions.
First Prize Aszacra Peace poetry award in 2008 for her contributions and editions to the Taj Mahal Review, biannual magazine, Cyberwit editors, India
She is also recognized as a Honorary member in the area of Education in various university research centers such as the Center for the Study of Dignity and Humiliation .Columbia U., N. Y, University of Oslo, and University of St Petersburg among others.
Also worked as editor of the internal bulletin of the Psychology Department of the Government of the City of Milwaukee, USA, with 10,000 monthly copies, for several years.
In 2000 she started to write bilingually, with a unique intention: to spread her peace ideals, worldwide.
In 2001, she founded the nonprofit organization “Bilingual MCA” to promote bilingual literature for peace, and since then, she edits a philanthropic E-zine dedicated to the publication and promotion of exquisite peace poems by many bilingual poets, worldwide. She has organized several poetry readings by members of this institution, who came to visit her country to recite their poems.
Since 2002, she is Editorial Advisor for “The Taj Mahal Review”, a bimonthly literary journal devoted to arts, literature, poetry and culture, published by Cyberwit.net. India.
During 2003 and 2004, she worked as a Bilingual Reviewer to Editorial El Ateneo and Director of Institutional Relations to the Argentine Center for Development of Writers.
In 2004 she was selected as Director in Argentina for the International Forum for a Literature and a Culture of Peace (IFLAC). She directed several poetry contests since 2004.
In 2005, she has been nominated as an honorary member of the Human Dignity and Humiliation Studies Columbia University) Global Core Team, and their Education Team. In 2005 also, she was nominated as Universal Peace Ambassador in the framework of the Universal Ambassadors Peace Circle, Switzerland.
In 2005 became cofounder and part of the directorate of the GHA Global Harmony Association-Peace from Harmony, joined to Dr Leo Semashko
Since 2005 Her peace poems and articles can be read at the UNESCO EOLSS Encyclopedia, and at their e book “Peace, Literature and Art.”
In 2007 she obtained the IFLAC MERIT AWARD as best and most active director of IFLAC worldwide. (The International Forum for a Literature and a Culture of Peace)
In 2008 she was called Symbol of harmonious peace in Argentina (CICLO POETAS DE ROSARIO)
In 2008 she was called Symbol of harmonious peace in St Petersburg, Russia ( GHA-Global Harmony Association)
In 2009 obtained the Azsacra- Cyberwit International poetry prize, India, and also became IFLAC Director in South America and Vice president at UHE Hispanic american writers union, Peru.
Since 2010 María is THE LOVE FOUNDATION, Florida, US. Coordinator in Argentina
In 2012 she has been re nominated Director for IFLAC South America and has been nominated Co founder and Honorary president for UNILETRAS (Literature for peace) Colombia.
Her work has been constantly published In the US at printed publications like Spirit Magazine, EAP Bulletin, Poesia and Poesia News, Latino Today, Meeting of the Minds Journal and Poetry Magazine.
In India at all issues of Taj Mahal Treview , a biannual 300 pages edition, since 2000 till 2015
Azcona has 16 books published, original in Spanish or English. Many others as author and coauthor in the country and abroad

HONORARY POSITIONS
Founder & President to Worldwide Peace Organization- WWPO based in Buenos Aires, Argentina and Chicago, IL- USA
Academician member in education for HD & HS Human Dignity and Humiliation Studies
Columbia University, NY
Cofounder Advisor to Poets and Storytellers of the Mercosur, Rosario, Sta Fe, Argentina
Director in Latin America for IFLAC: International Forum for a literature and a culture of peace .
Cofounder &Vice president – GHA: Global Harmony Association-St Petersburg-Russia
Also symbol of Harmonious Peace and Honored Translator
Peace Ambassador -Circle peace ambassadors of Switzerland and France
President and Co-founder of United Nations Letters of Colombia
Deputy Executive President of UHE Hispano mundial Union of Writers of Peru
Honorary Advisor for the Editorial and Publishing Non-profit Foundation Cyberwit.net India
Representative in Argentina for “The Love Foundation” Florida, USA
HER BOOKS:
In Spanish:
She has written as both author and coauthor about sixteen books: In Spanish there are two poetry collections “Dos Talles Menos de Cerebro” (1999) and “Mundo Postmoderno” (2000), both books fully illustrated by the author herself. A novel “La Voz del Ángel” (2002) and a self help essay, “Estar de Novios Hoy”, (2003), this one written jointly with her husband, Ernesto Castellano.”El Gran Doctor de la Paz” 2016, Azcona and others, published by Cook Comm, Chicago USA; “Vivamos en Paz” 2017 by M C Azcona, published by Cook Comm, Chicago USA.
In English:
A peace poetry collection called “Window to Heaven” in January 2005 and “A Guide to finding peace” a 300 pages -essay and bilingual poems book, January 2008 – by Cyberwit,Publishers Allahabad, “My Beloved Daydreams” poems and poetry renderings, SANBUN, New Delhi, all published in India. “Strategies for Peace”, published by Cook Comm, Chicago USA. “Peace, Literature and Art.”UNESCO EOLSS
Membership to literary organizations in India
• INTERCONTINENTAL CULTURAL ASSOCIATION
Director Dev Bhardwaj
Address: # 3437 Sector 46-C
Chandigarh-160047 PUNJAB INDIA
E-mail: writerdev@rediffmail.com
• WORLD LITERATURE SOCIETY
Bhaskar Roy Barman (Dr.) was born on February,19, 1950 at Badurtala. Comilla (now in Bangladesh, former East Pakistan). He is an internationally published poet, short-story writer, novelist, translator, critic and book-reviewer. He did M. A. in English literature, B. Ed. (Methods in Teaching) and D. Litt in Language and Linguistics. Ph. D. and D. Litt. and is presently working as a teacher.
THE PEACE FLOWER
She opens velvet petals widely
While the cold dew covers her slightly
It is formed by rivers of tears originated
In victims suffering disconsolately
The pink glow fades the cold color,
That is formed under a sky blue
Not even the pain, fear or the sorrow
Survive to its spiritual perfume
She wants to give peace under a golden sun,
Emerald the cup, the face silky…
She can feel that the world has changed…
Flower that gives its fruit, generously…
Should grow in this meadow of ours!
Instead of death vile and hateful war!
PEACE AROUND
I dream of a world without roaring
From the deadly killing machine
I dream of lands far from the shadows
Where rain is made of heartfelt ink
I wish to draw smiles on all faces
Using rainy drops, which are multicoloured
To form a garden with all the races
Where differences are never noticed
I think of so many and many babies
Who have never learned to smile?
Their happiness is frozen
Because of hunger, illnesses and war
I’ve learned to listen to a special sound
While the moon gazes to the roaming sun
I’ve learned to discover Peace around
And also invite her to a morning dance
You need to help me in this endeavour
By giving your hand to who is on your side
Discovering Peace around your heart
To enlighten the darkness of this decadent life.
A NEW COMMUNICATION
Recondite sub labial levels
Virtual ambitious beyond belief
Imponderable codes in oblique
Soft wing folds, intangible symbols
Vestige agitates magic sortileges.
Unspeakably soul starts imperceptible to speak.
Thaumaturgy eludes corporeal obstacle.
Caracole stairs made of illusory marble.
The moon overwhelms the night with radiance…
The iridescent moon starts a trip towards self-esteem.
Her beauty is a dazzling swan at the dance
While golden sun is involved in glorious dreams.
The moon lets fall down a tear of joyfulness
And stares at herself so beautiful and pure
The sun gives her a glance of tenderness
He is now in love with her till times endure.
Soft, inviolable, ductile prelude
A crystal of inter spiritual beatitude
Sublime instant of universal peace.