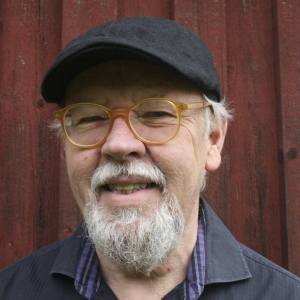 BENGT BERG ( Sweden)
Bengt Berg livs in Torsby, Värmland, Sweden. Since 1990, Bengt has operated the publishing house, Heidruns Förlag, and an Art Café in his home village Fensbol near Torsby in the Province of Värmland.
Bengt Berg’s debut poetry collection, Where the Dream Ends, appeared in1974; and since then he has written more than thirtyfive books, mostly poetry. His poems have been translated into Nordic languages, as well as into many languages. He has participated in many poetry festivals around the world, this year in Vietnam and China.
Berg has won several Swedish Literary prizes, among them some from The Swedish Academy.
Characteristics: Bengt Berg’s poems are full of humor and warmth, and characterized by sharp insights into the oddities of people and situations. With time he has become more and more aware of form — without sacrificing other merits — and his poems appear at times to have been written by an Eastern master.
Humor is woven into the poems but Berg has also explored themes that are unusual for this genre. In his programmes before live audiences, Bengt Berg is a humorist with a serious side, a performer who gladly stretches the boundaries between different art forms and traditions in poetry. These public appearances contribute to the fact that his books enjoy unusually high sales on the Swedish market.
A New Year
A New Year seldom comes alone,
in tow it hangs all days-of-the-year
like sea-shells threaded
on a string of wind, filled by
forgotten sailors’ songs.
A New Year is date-stamped, and comes
with the seal of growth-rings; after some months
you can buy the recently new calender
for half-price.
A New Year provide us with a blind-fold
just because we will get appeased with the shower of sparks
from the New Year rockets which try to exceed
the Karla carriage, while clinking from champagne glasses —
more and more sounds like somebody’s way home
over night-old ice.
A New Year makes us grown up once again,
just like Christmas transformed us like children
— once again. (The difference is that the child can see
how its longing becomes his fulfillment, while
we grown-ups ensure that the living
candles do not burn to the end).
A New Year gives us hope that —
what we didn’t want to happen — will not happen,
that the mornings of the New Year should be as shining
as the olives before disappearing
in the Quattro Staggione oven.
A New Year is something that we already know a lot of —
like unexpected smiles that will meet you
in the street freely, like idiotic [drivers] overtaking at will,
like Spring Equinox,
like summer flowers,
like it is time for changing to studded snow-tyres.
A New Year to enter, just to be met
by the perenial current question:
what prevents you from happiness?
Exile
In the foreign city
with an incomprehensible language
you are walking along unfamiliar streets;
not even the water of the river
which flows under the stone arch of the bridge
you know not the name of
— and there you are, standing
totally alone, in your own shadow
which slowly trickles out onto the asphalt
like a distant melody
from a flute that is out of tune.
But suddenly
a little bird notices you,
meets your gaze
with its pepper-coloured eyes,
before it disappears into the dawn.
Get ready for a new day
think about love a moment,
know thar the road ends
at the same place as it once began
Stand still waiting for the rain,
look for a circle in the grass
where we once stood
cup your hand overthat spot
(as for protection),
think about love, know
that rain will soon start to fall;

One thought on “BENGT BERG ( Sweden)”