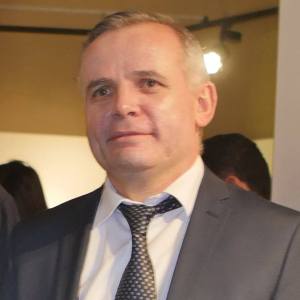 Kujtim Morina (Albania)
Kujtim Morina is an Albanian diplomat, writer and translator. Morina received Bachelor’s degree in Maths, Law and earned a Master’s degree on European Studies from the University of Graz/Austria. He works currently in the Albanian diplomatic service after serving a long period with international organizations as well. He has published books of poetry: “Drunk under the fog”, 2007; “Return of eyes”, 2010 and a book of short stories “Next time” (2015). He also, has translated and published: “The Gulag Archipelago” Aleksandr Solzhenitsyn (Botimet Princi 2012); “Song for my name”, Linda Hogan, poems, (OMSCA-1,2014); “The soul dances in its cradle”, Niels Hav, poems (OMSCA-1,2016) and “A collection of Kuwaiti poetry”, (OMSCA-1,2017). In English, his poems were published by the literary magazines “The Sound of Poetry Review”, “LAKEVIEW, International Journal of Literature and Arts”, The Galway Review, Prosopisia, etc.
To Syria
Oh Holy Land,
even your heaven is blackened
by the rising smoke of war.
Light candles at any corner
in memory of the dead,
and in disobedience to the regime
– but no violence.
Man cries for falling of a tree,
let it alone another human being.
Syria,
fighting with yourself –
one arm strikes the other one.
Go back to your own.
Don’t you listen to the prayer song of Sami Yusuf:
“silent words”, heartfelt words
for thoughtful children,
lonely children
and ruined cities.
How many people are now dead,
deprived of enjoying their lives!
How many millions spend overnight
without a shelter!
How many widows
confront their fate every day!
How many mutilated,
are left with broken dreams!
How many! How many! How many! …
Oh Syria!
The stems of dead lilies
will sprout up again.
Cities will awake from the ruins
and power held by blood
will lose its sway and soon decay.
Then the country should be recovered
with love for human being
and not hate.
Sirens
They don’t lure us ahead
but backwards.
Don’t start.
The sea is full of heavy waves,
another time.
Don’t do it.
Thousands of devils will storm you,
You better don’t.
Don’t go.
Your house is leaking
and you mind for someone else’s business.
Sirens of nowadays
could be your wife, a close friend
the old house.
They fear that you don’t return back
and they remain alone.
A glimpse of love
How I did not realize
that glimpse of love!?
After several days to catch her eye,
she came finally to me
with a sweet approach.
That glimpse of love
was an invitation
to leave the group,
to go away just with each other
and enjoy some dreamy moments.
It seemed a lucky strike
but I did not catch the moment.
When I realized latter
I was thousands of miles away.
The moon was burning evenings,
waiting for the sun that never come.
However I kept you in my heart
like a bright constellations of stars.
Game of moon with the sun
Where does the sun go at night?
It sleeps with the moon.
Why its body isn’t noticed?
It hides behind the white moony legs,
rolled up.
Can we see the moon at the daylight?
Yes, when it parades with the sun.
Why does it appear a little bit pale?
It vanishes into longing,
staring at its adored male.
What happens when the moon grows up?
It gets pregnant and then gives birth a new one.
The old moon becomes a star
and hides into the sky.