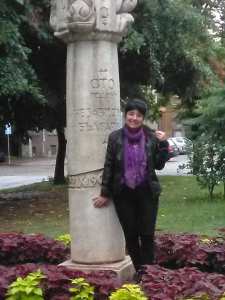 We met when God created the worlds,
and filled them with His love.

Then we got lost because we were scattered
in the edges of the universe.

I have kept the memory of you since that time.

Since then, the sun has been rising thousand times,
the moon has been going down thousand times.
I’ve been waiting for you thousand days,
thousand nights I’ve been dreaming of you …
On how many planets I’ve searched for you.
How many galaxies I have passed …

When we met again,
the light erupted.
The world has expanded,
in it were God, you and me.

My heart was beating strongly.
So loud that the heart of the Earth heard it.
Earth began to turn more merrily,
the river noise became more playful,
the songs of the birds sounded more in love,
the wind was up lifting to the sky.

Until I find out what’s going on,
I felt your heart beating next to mine,
while I was returning to reality,
you hugged me.

DROPS IN THE GARDEN

Dewdrops on the roses –
amid tinges –
blooming branches
bird flight, curious eyes.
Drops evaporate
and scatter in the air
photos from the morning city.

Figs fall quietly,
thump into the quiet.
Bees are buzzing.
I turn a leaf,
guessing at its palm.
Sweetness on fingers.
Honeymoon is coming.