Hailing from Hyderabad City, India, I have been composing poetry for the past 25-years. Graduated in Bachelor of Commerce (B.Com) from Osmania University, I successfully accomplished a Post Graduate Diploma course in Journalism.  Fascinated by literature since teen-age, especially poetry, it paved a way to transform me into a poet. Presently employed with the ‘Andhra Pradesh State Co-op Bank Ltd.’ [APCOB] at Hyderabad City, India, since 1988; I am presently working in the cadre of a Manager of the Bank.

To establish myself in the arena of international poets, it took several years of prolific writing. The following milestones reflect my present stature: 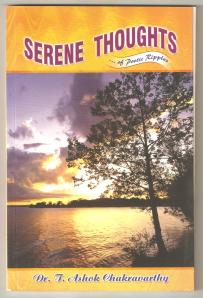 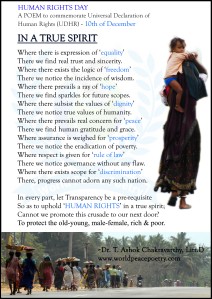 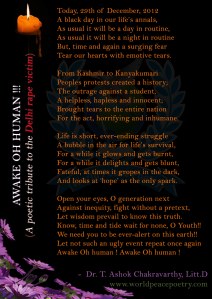 Poetry… Poetry… Poetry…! Jotting poetic thoughts on the horizon of memories and standing a witness to the unending emotive issues and the day-by-day multiplying human sufferings, the need for social awakening and the quest for UNIVERSAL PEACE keeps on stirring the hidden poetic instinct within. The pursuit for HARMONY cultivate the seeds of HUMAN CO-EXISTENCE aiming to ensure that the grapplehold of violence, social evils, hostilities and conflicts would diminish day-by-day. By enlightening the challenging realities for a genuine universal cause for Peace, Prosperity and Progress through poetry; if efforts are made with a peace-filled spirit, UNIVERSAL PEACE would not be a distant dream. World poets, peace-loving citizens, social workers, artists, writers,academicians, economists, peace ambassadors, peace activists musicians and so on, let us move together to establish a lasting bond to accomplish this mammoth task.

Holding Memberships and prominent portfolios in several cultural and other organizations across India.