The interview in English & Arabic

The interview that the journalist Rathwan Shalabi the reporter of Shourouk newspaper had with the international writer and poet Munir Mezyed on the occasion of his visit to Tunisia to make preparation for “Odyssey International Festival” in Tunisia March 2020.

Munir Mezyed is a well-known international writer (poet, novelist, translator, essayist & peace activist) who dedicated his life to enriching the World literature through writing & translating. He wrote more than 100 books and translated 75 books. He writes in both English and Arabic. and his poems have been published worldwide and translated to Romanian, Spanish, French, Italian, Polish, Danish, Greek, German , Portuguese, Serbian, Slovenian, Albanian, Indonesian, Persian, Hindi …etc.

He studied in England and U.S.A, traveled all around the world and settled himself in Romania in 2005 where he found his freedom after he had left Jordan where his work was banned there as well as in Middle East due to because of his enlightenment and liberal thoughts and his defense of political and social rights as well as for the sake of freedom and respecting human rights and for the sake of a human culture free from extremism, discrimination and hatred..

-Question: You are in Tunisia to make prepartion for an international festival in Mounastir city .What is the content and objectives of this festival?

Answer- It is Odyssey International Festival for Arts & Culture. It is normally held twice a year, in September in Romania and in March in one of other countries. This year we chose to be in Tunisia. The festival includes a lot of cultural activities in the context of interaction with others and dialogue between civilizations by organizing common artistic shows between Europeans and Arabs besides poetry reading among different poets .We will translate poems in the mother language of the host country ,and since this session will be held in Tunisia, all poems will be read by one hundred and fifty poets among of them are one hundred poets whose poems will be translated into Arabic language and gathered in international poetry anthology book. 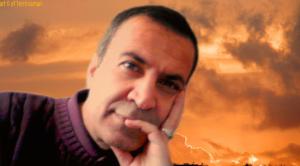 .-Question: What is the position of Arab poetry in the world and what is the missing ring in your opinion?

-There is no missing ring, but there is a predominant lobby; the same faces are everywhere created either by media or politicians for one reason or another whereas the real creative people are excluded. There are not even opportunities for young talents. Therefore the Arab poet and the intellectual should free themselves because there is no creativity without freedom. I fought for my freedom and chose to live in Europe. Before demanding for the liberation of peoples, it is a must to free the Arab intellectuals, then we can liberate our countries and live in a better reality .Unfortunately, we see that the Arab intellectual is chasing limelight and power which makes us unable to compete with Western culture and dragged us into backwardness.

Question: how did you deal with what is called “the Arab spring”?

-There are accusations against Arab spring. “I ‘m with state of institutions and law and every citizen is entitled to be free and enjoys his full rights but without chaos and away from the speech of hatred that dragged us into extremism and violence. Arab spring has faced internal and external setbacks of specific interests and there is who used the revolution , but the people have real demands because there is corruption in Arabic regimes as well as justice is scarce in Arab countries where the rule of law is absent and People parents are at higher risk of poverty. We really can’t ignore those challenges or justify what happened through conspiracy theory and that there are secret agents standing behind Arab revolution. Then how can we ignore or deny the existence of all these problems from which Arab people do suffer? Even if those people had been incited, they have rights must be fulfilled.

In 2005,I went to Jordan with three hundred thousand dollars to set up a cultural project, but I was confronted by a group and gangs of terrorism, extremism and backwardness that destroyed my project and left me no choice but to leave Jordan to Romania. I joined this country with empty pockets. Before leaving Jordan, I warned them that the region would be drowned in blood and chaos. I

I must admit that I am so happy now to see Tunisia is moving to be democratic state and reinforcing human rights. Indeed this move is a victory for Tunisia and for all the Arab peoples. Sadly some still attribute the revolutions of peoples to invisible hands. I am very sure that what so called “invisible hands” would not be able to make all the young peoples of the Arab world protest .we should acknowledge that if a state is free from corruption, dictatorship, and oppression, then the solution to all these problems lies in liberating culture, giving to the young better education and to the people better health system. Consequently the state that provides its citizens with food, education and health care can be depicted as a successful state and the state in which corruption and oppression spread is the one responsible for chaos and terrorism.

I think that in five years from now, Tunisia is going to be like European countries provided that its people keep struggling without fear and combat terrorism with culture.

Question: How can you explain terrorism phenomenon that becomes widespread especially after the rise of Arab revolutions?

Answer – I wrote a profound research about this issue and discussed in many European countries, and I wrote a book about handling terrorism and extremism. The people have gone through oppression and injustice for fifty years and the most serious thing that Arab politicians did was politicizing culture and putting the intellectuals under their wings and the man in the street notices that the Arab intellectual has one concern which is driving a car and appearing in mass media to sell words and to achieve his personal interests which made the intellectual be a disgusting figure in the eyes of the citizen who resort to other sides that made him believe in the return of the glory of Islamic state and other promises so they trusted them in the absence of awareness and culture and thus these sides that I call them vampires found a breeding ground to allure our youth who fell as victims to those impostors because of politicians eliminating culture, but today we should bring our youth back to culture with its different meanings, then our people would be free and terrorism vanquished because our responsibility is defeating this terrorism, and we as Arab aware intellectuals are capable of doing that .

Question :Do you think that poetry is still a weapon of struggle serving the Palestinian cause or it becomes a commercial means?

-Here we should step back and pose the question: what is the role of culture? Poetry is the most powerful human language, but we Arabs understand poetry in a wrong way unlike the European vision because poetry is not a political discourse but rather an intellectual one that creates in citizen awareness because the Zionist entities cannot be defeated with a retarded poor people for the cultivated people are those who build a strong state and many countries wagered on culture to become among the powerful states like Holland which doesn’t own nothing but some cows but the salary of citizen exceeds five thousand Euros per month unlike Sudan which owns tenfold cows than Holland and we can see what its situation looks like.

-Question: Is our destiny to remain colonized as a result of this cultural backwardness that you talked about?

The solution lies in not subjugating culture to politicians. I invite politicians to keep their hands off culture because through setting the intellectual free , the liberation of our people will start and the Arab intellectual should set himself free then the people would listen to him, but as long as he is chained with interests and political sides, agendas and ideologies ,we cannot make any progress. If we want to rebuilt Arab societies, the intellectual must free himself and demand for his rights and the state should respect its intellects because the intellectual is the one who lifts and builds the state and here we should differentiate between the state and gang in that in our Arab countries unfortunately , there is no existence for states in the sense of the word ,the only two presidents who wanted to build a state were king Hassan in Jordan and Habib Borguiba in Tunisia who wanted to build a state but it wasn’t finished ,so Tunisian people has a golden chance ahead of them today to establish a real democratic state and I haven’t ever expressed my support for any president but for the new president of Tunisia Kais Saied whom I see him as the right man, in the right place , at the right time . I believe he is capable of protecting institutions and building a state. I do not glorify persons but I ‘m in favor of institutions and respecting the law and when I supported Mr. Kais Saied, I was supporting the concept of state and not the person because he is a man of law and capable of building a state. In fact, I do support attitudes and principles because they are eternal while persons are immortal.