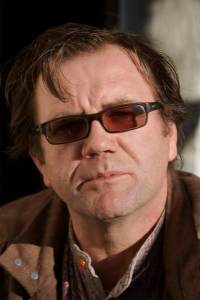 Franjo Frančič (b. 1958) a poet, novelist, playwright and writer for children spent

of galvanizer, but later also finished the Faculty for Social Work. Since the early 1980s

he has lived as a freelance writer in Istria. His work includes more than 30 books.

by the well known novel Domovina bleda mati (1986). It was awarded the Zlata ptica

prize, which the author refused to accept. His writing tends toward representing real

life, openly and directly telling what are usually unspoken themes. The people in his

themselves. In his work for young readers he deals with growing up in an unsuitable

environment. His writing has both qualities of verism and lyricism to express dreams

in the midst of reality.

Once a month grandma and I went to have lunch with the aunt in Šiška on bus n° nine, aunt worked in a bank, her husband Janez also worked in a bank, she didn’t have children, contrary to her sister, my mother, who produced nine, with three losers, I was the first of the five from the third round. The lunch was always the same, beef soup, salad and mashed potatoes from her garden and a microscopically tiny piece of meat for grandma, rarely also for myself, and if aunt was in a good mood grandma got a glass of wine. But at eleven thirty there was always panic, because aunt became nervous in the fear that we would meet Janez, who was coming from mass after his compulsory visit to the pub in the vicinity of the church, we always had to leave before and sometimes we got tokens for the bus. One day nevertheless we met on the staircase, he didn’t even look at us, downstairs I could hear him yell at aunt: those sons of bitches don’t come for to my place! p.s. Forty years later aunt asked me to visit her, she waited at the door all sobbing with her chattering denture, she had given a gold ring and a necklace with pearls from Ohrid to her daughter, Janez retreated to the balcony, all fucked and in pieces, in his piss-stained pants he was looking somewhere into emptiness, like a real fucking son of a bitch.

I have finished my fifth year of high school, my father is such a cunt, in autumn I met a two years older guy, I dreamt about him, mother is not much better, since I study dancing he noticed me quickly, I have no idea what they do together, he had a girlfriend in his town and I was hurt when he denied everything, this weird coxless pair, when he was supposed to be at the lectures I saw him with a schoolfriend, they were sitting in front of the TV and staring without a word, staring, he was hugging her and looking deep into her eyes, these two weirdos, staring and staring, without a word, now I don’t know how I am going to survive, I feel so hurt, staring and staring, without a word, without a word.

My godfather is holding a bottle of wine in his hand and toasting, mum comes almost every night and demands that I drive her around in the old ford escort, the south wind and migration, comas and a remote-controlled pilot, I waited a long time for my hand to become larger than my father’s, the rainbow door of the holy never, a hunchbacked grandma and a pram for twins, then I waited for the right moment and knocked him down, children are playing in the city park, in white, pigeons are fighting over crumbs, he was lying on the floor like a son of a bitch when I kicked his head in, and forgive us our sins, I followed the words of Jesus Christ: do onto others as you would have them do onto you, or was it Confucius who said that before him, but then children turn into pigeons and all narrows down to a trade, because it is a bugger if you deny God too much then he IS, because father did this to me so many times, but of course there are no words.

At four am it is dawn and the crazy jay, a needle and rocks in the mouth, at five the broken stalk of a sunflower, you flee to the temporarily liberated area, soldiers of vines and rockets of cypresses piercing the sky, underneath the houses on the saltpans, roofless, swim in the sea, how I planted trees and built the shed without roots, at eight zero zero, obituaries, in the strategic positions always the same sons of bitches, at nine thirteen Leon rolls a joint, cataract above the lump of time, crushing, Jubilo Iwata plays against Jokahama, total nought, light in August, filigree pavements, where to, dear friend, the CDs are evaporating, the snow is slowly falling, outside the world is melting, into its fucking particles, Sunday afternoon, the winter of summer.

At dawn the cascade of light covers the transparent, hanging veil, blind butterflies are hugging the trees, sharp edges of the world, the images are dancing to the song of youth, the song of oblivion, the flag of the sun at half mast, the hand spasmodically feeling and looking for lost mornings, birth is a farewell, the icy fire is going out, morning stars are softly falling into the arms.

In the middle of the night I was woken up by a knife in the water, the snakes have left the roof of the house without roots, captured, I eat rocks, words are closed up in books, paintings in museums, drivers in their trucks, the child stretched out with his eyes closed, where are my wings, he was wondering in the dream, the head of a pigeon was lying in the grass lacerated, you die for a moment, it’s not even surrender, you are the shadow of a shadow, a rider in the desert and you are both there, strangers without a face, how I despised and hated them, it’s branded, there is no forgiveness, you wait for the morning, clouds of leaden images, all the anxiety returns again, the naked, destructive fear, again you creep on the floor and lick the blood of the female who betrayed you, ashy sky, the squeaking of the solitary bird, time is sliding through the slots of memory, this son of a bitch will fuck up my brain again and she will stand there and laugh, laugh.

Somewhere in Celine’s Journey to the End of the Night there is a passage, I entered unannounced into the flat while the hero was holding my mum’s hand, I saw mum through the frost-glass of the living room and a woman who was lying on the sofa, mum was persuading him to join the soldiers on the front, I opened the bathroom door, froze, you will protect your country, won’t you, your country is your mother, says mum, the bath was full of blood, slime, pinky flesh with no head, no, no, cries the hero, you are my mum, naturally I didn’t open the door, I never asked her, I knew in advance that she had the answer ready, then the hero ended up in the military compartment of the psychiatric clinic, I went there twice, there was this woman who was speaking faster and faster, I’m a murderer, a murderer of children, they took her to the cage and tied her up with leather belts, a baby, who weeps, jeezus!