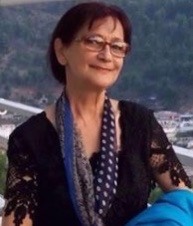 Iliriana Sulkuqi (Fejzullai) was born in the city of Elbasan ( Albania) in 1951. Iliriana Sulkuqi studied at the Armed Forces Academy. Sulkuqi also completed studies in linguistics, literature, and philosophy.
Sulkuqi has received numerous national and international awards. Her poems have appeared translated in: Italian, Greek, Macedonian, Bulgarian, Rumanian, and English.
Iliriana Sulkuqi was proclaimed “AMBASSADOR OF PEACE” by the World Peace Federation (October 2011).
Iliriana Sulkuqi is honored with the title “MOTHER THERESA,” for displaying “Reflection of Kindness, Peace, Love for a Special Contribution to Art, Culture and Humanism”, Skopje, 2016.
Iliriana Sulkuqi’s life and work is depicted in a documentary film (in Albanian and English) ‘Lirikë shpirti” ( Lyrical Soul )
Since 2004 Iliriana Sulkuqi resides in New York.
Where can I find the HALVES …?
A few and a half pounds –
it weighs on me
the body …
A few and a half numbers
The glasses…
Some middle and more
the shoes …
Eh where do I find the halves …!?
MY TITANIC – LOVE
If love is a sin,
I don’t apologize
”(anonymous).
In my “TITANIC”,
built with love molecules,
I invited on a dream trip – of water,
my loves,
since childhood …
But how did I know, how did I do
That to anyone
The spirit
Couldn’t melt?…?
… And the “Titanic” sank …
But how did I know
that the hands are cut
and you can no longer caress
no memory …?
… And “Titanic” sinks again …
In the depth of the waters
continues to make sounds
a violin
that accompanies until the end of the Escape – the arrival,
As a START.
MY FINGERS …
(A trembling leaf –
Envelope closed …)
Once upon a time,
my fingers crawled in the branches of the fruit trees
up to the roof
of my childhood home ..
Once upon a time,
shortly after,
they played piano sounds
–
even if consumed in washing clothes
the night before I grew up …
(and they never complained) …
My fingers – and then again after
they caressed love
In the novels forbidden … –
Although with removal pigments
in the phases of life –
they didn’t complain ..
…
My fingers,
again with galactic sounds,
they moved making me first mother,
and after woman …
…. under their soul rhythm,
they caressed diapers of babies …
and the verses
they didn’t complain …
And shaken and tightened,
my fingers, olives
in the forgotten olive groves,
(because even those who planted them,
in other exiled dreams …
had flown …).
My fingers hurt –
until the marrow of love –
pain.
They will obey, if anything,
to bend around the body,
the world, with the loves that made me born? …
THE “CHAIN” OF THE RINGS …
Ring,
cord around the throat, just born …
Ring crescendo,
ring … ring
on the fourth finger of the ring
like handcuffs without words …
Ring also the iris of the eyes, ring.
A necklace around the neck – ring,
also the screw belt, Ring
…
Like “earrings in the ears”,
…
The whole life cycle – Ring.
Ring, the circles of tears
from loves that travel
fleeing without the onslaught of the Rings …
Ring –
the circumference of the spoon
in grandma’s soup
that remained as satiety,
in the digestive cycle …
also the nostalgia in exile around the world – ring …
Ring: the perimeter of a table
where the policy is recycled
since the Word was born,
in the round podiums,
from heavy armchairs,
where dreams ended in handcuffs of rings …
How to save the Spirit from the rings …?
ME WITH MY SHADOWS – –
SILHOUETTE OF GOD …
My monologue,
along the walks
in the daytime,
accompany it
without my permission,
My shadows,
shorts, longs …
according to the solar time, without eclipse.
My shadows
make my monologue – dialogue,
discussing
with the invisible part
of myself,
with or without cause …
My shadows –
Without noise,
without contours of beauty.
Only graphic silhouette
from God …
Me and my shadows –
a missed tango
in any stage of the false world.
Back to back,
with each other
With the same Spirit,
we live
like two women without identity.
Translated by Taddei Sulkuqi Elida ( Siena, Italy)
ARE MY CREATION’S LOVE …
(I gave you a birth of spirit.
I grew up you with dew buds.
Pampered with fingertips,
where the biorhythm is transmitted to the marrow of the soul
to cure pain …)
…
I created you from my mind
Love,
just like the stylist his model,
only to be affected by the dream,
just to wake you up only with your mornings
still without opening my eyes …
You are my creature,
Love,
the most beautiful of all time
since Adam and Eve
until last night, now
seven generations ago,
to become the Bride with bodies
around the castle of the world,
without tragedy like Romeo and Juliet,
without tribal feuds,
without the colours of racism,
without jealousy
to scare the kiss
from the body…
…
I painted you with invisible contours
with the brush of the seasons.
Feelings of seeing and feeling them alone,
with the help of the Gods,
ripping the rain cords
that obstructed my vision of closeness…
I sang to you in silence
until the sound cords
calluses caught me
of sounds
escaped the galaxies…
…
I published you as an open book
in the hearth’s printing house,
where the blood’s molecules
sort the words,
where the lungs
filter some question marks like crooks,
where on every page
sign for you
without dying my ink …
To engrave with my mind as a sculpture
and I ordered you,
like Michelangelo “David”-
SPEAK WITH,
Bless you the Word,
SPEAK WITH!
Translated by Doc. Fatmir Terziu