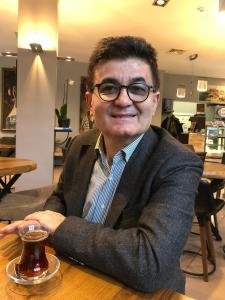 Graduated from the Political Science Faculty of Ankara University. Earned his Master’s Degree in Public Administration and Public Relations. He served as a mayor, district governor and Public Relations Department Head of the Prime Ministry. His nine poetry collections were published, and many of his poetry and literary translations appeared in many national and foreign literary publications and anthologies. Attended a number of national and international poetry and literary festivals in the country and abroad, and acting as an organizer for some of them. Received numerous literary awards in the country and abroad. A member of many literary organizations. He is currently sitting on the Executive Board of the Three Seas Writers and Translators Council. He is the Turkey Culture Delegate of the Liceo Poetico De Benidorm. He teaches at the Translation and Interpreting Studies Department of Yeditepe University, and Communications at the Communications Department of Bahçeşehir University. He is the editor-in-chief of Papirus literary magazine published in Istanbul.

Get to see what’s coming

Not losing your footing

A breeding ground for hate might be fertile
Regardless, it is not the end of hope
There are so many features to explore
Not losing your footing opens many windows

A MIRAGE OF MUNDANE REALITY

Once a witch had told the tribesmen that a man of honor would be nothing
If a true character of a love affair would not be proven through a trying testing
Ancestors and souls of fire, wind, stones and water could come alive in an instant
Where the beliefs and legends meld in the wildest jungle of no man’s land
Challengers are face to face to survive in the hottest sun of that grisly desert

Yes, here we have you and me, in the depthless of a bottomless desert
It is not a children’s play that you can shape some dough on your counter
It is fair to say, your amusement with the past cannot come back for good
No one desert had made your life miserable in old days of encounter
Wouldn’t you be nice to have all those horrific memories left behind?

And not to start a new one…