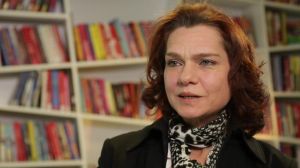 Aslı Erdoğan (born 8 March 1967) is a prize-winning Turkish writer, human rights activist, columnist for Özgür Gündem and former columnist for the newspaper Radikal. Her second novel has been published in English translation.[1][2

Born in Istanbul, she graduated from Robert College in 1983 and the Computer Engineering Department of Boğaziçi University in 1988. She worked at CERN as a particle physicist from 1991 to 1993 and received an MSc in physics from Boğaziçi University as a result of her research there. She began research for a PhD in physics in Rio de Janeiro, Brazil before returning to Turkey to become a full-time writer in 1996.

Her first story, The Final Farewell Note, won third prize in the 1990 Yunus Nadi Writing Competition. Her first novel, Kabuk Adam (Crust Man), was published in 1994 and was followed in 1996 by Mucizevi Mandarin (Miraculous Mandarin) a series of interconnected short stories. Her short story Wooden Birds received first prize from Deutsche Welle radio in a 1997 competition and her second novel, Kırmızı Pelerinli Kent (The City in Crimson Cloak), received numerous accolades abroad and has been published in English translation.[3]

She was the Turkish representative of PEN International‘s Writers in Prison Committee from 1998 to 2000. She also wrote a column entitled The Others for the Turkish newspaper Radikal, the articles from which were later collected and published as the book Bir Yolculuk Ne Zaman Biter (When a Journey Ends) and featured in the 2004 edition of M.E.E.T.’s journal.[4]

She is widely traveled and has an interest in anthropology and Native American culture.

From December 2011 to May 2012, at the invitation of the Literaturhaus Zürich and the PWG Foundation, Erdoğan was Zürich’s “writer in residence”.

She was a writer-in-resident for the ICORN in Kraków, Poland in 2016. After her return to Turkey, she continued to write for the pro-Kurdish daily Özgür Gündem.

Aslı Erdoğan was taken under custody during the police raid on Özgür Gündem on 16 August 2016. She was detained on 17 August 2016 for being a member of the advisory board of the newspaper.[6][7] On 20 August, she was arrested and jailed for pretrial detention.[8] Özgür Gündem was quickly succeeded by Özgürlükçü Demokrasi (“Libertarian democracy”), which featured a daily column called “Aslı’s Friends”.[9]

The City in Crimson Cloak (Turkish title: Kırmızı Pelerinli Kent) is a 1998 novel by Turkish writer Aslı Erdoğan, which was republished in 2007 by Soft Skull Press in English translation by Amy Spangler.[1]

Özgür, the young Turkish protagonist of the story, having deserted her past and secluded herself from outer world, is poor, hungry, and on the verge of a mental breakdown. She has a single weapon left in the all-out war she has declared against Rio de Janeiro: to write the city, which has trapped her and robbed her of everything.

Amy Benfer, writing for Barnes & Noble, states, “The novel might have been richer had Erdoğan taken advantage of the structure to interrogate Özgür’s motives and perceptions more fully than Özgür herself can. But it does succeed as a sort of reverse postcard – the hazards of the tropics seen in the eyes of a woman from winter climes.”[10]

The interconnected short stories feature women whose lives have been interrupted by forces beyond their control: exile, serious illness, and the imprisonment of loved ones. These tales culminate in the novella; the “stone building” is a metaphor for the various oppressive institutions—prisons, police HQ’s, hospitals, and psychiatric asylums—that dominate the lives of the characters.