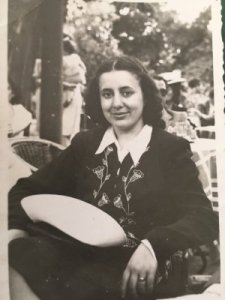 From the 1940s, communist Albania was shut off from the outside world. During this time, Albanian writer Musine Kokalari was a powerful dissident voice, risking her freedom to oppose an oppressive dictatorship.

This display includes material from our Daily Herald Archive, along with images collected by Dr Agata Fijalkowski (Lancaster University Law School) during research trips to Albania. Agata came across the trial transcript of this remarkable individual and felt compelled to find out more about her.

In 1946, Musine was arrested due to her involvement in the Democratic Coalition, and stood trial before a military court. Her trial transcript formed the basis for the film that can be viewed at the end of the display.

Little evidence of Musine’s writing exists today, as it was banned and destroyed by the Albanian authorities. While imprisoned, and later in exile, she secretly wrote her book How the Social Democratic Party was Founded, completed in 1972.

Her impact as a political activist and free thinker has been posthumously recognised by organisations such as the PEN International Writers in Prison Committee. In recent years, she was declared ‘Martyr for Democracy’ by the Albanian Government, and was the first woman to receive the ‘City’s Honour’ of her home region of Gjirokastra.