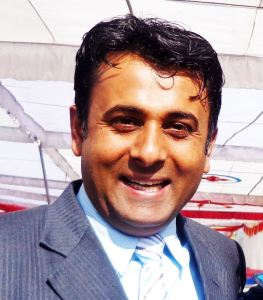 Mahesh Paudyal (b.1982) is a Nepali poet, story writer, critic, and translator. A lecturer of English at Tribhuvan University, Mr. Paudyal has written extensively for children and adult readers, and has translated more than 2 dozen books from Nepali into English. His major works include Tadi Kinarko Geet (novel), Tyaspachhi Phulena Godavari (stories), Of Walls and Pigeons (stories), Sunya Praharko Sakshi (poems) and Notes of Silent Times (poems). Among his seminal translations are Dancing Soul of Mount Everest (representative modern Nepali poems), Radha (an award-winning novel by Krishna Dharabasi), Unfinished Memoirs and Prison Notes by Sheikh Mujibur Rahaman and Silver Cascades (representative Nepali short stories.) A recipient of Nepal Bidhyabhushan, Narendramani Dixit Gold Medal, Bimal Gurung Memorial Award, Sudish Niraula Memorial and Prasiddha Kandel Memorial Award, he has also represented Nepal in many international literary seminars.]
Workers’ Poem
In a small gathering on the lawn
The poet was reciting his verses.
A little away, some masons and labors were busy
Hammering nails.
The poet stopped, looked at them, and yelled—
“Stop your pranks! Can’t you see I’m reading a poem?”
The workers were silent. The poet recited his verses.
Much later, when everyone was gone
The workers resumed their life-song.
I don’t know if the poet heard it.
Regret!
On the dewdrops clinging on the window glass
I sketched your face with my forefinger,
Marveled at it for a while
And exclaimed: “Menaka!”
In no time, I said with a start, “My love
Though beautiful you look
When caught in dewdrops and glass
Do never become glass!
Do never become dewdrops!”
Life Tourist
I am a life tourist!
From how many places I looked at life!
Mounted on the bonnet of Tenzing[1]
I sometimes looked at it from the roof of the snowy mountain
Ridden on the forehead of Armstrong
I looked at it from the moon
Yet not satiated
I looked at it from the country of snow the mounted on the feet of Roald Emundson[2]!
But life, to swear in your own name,
It’s true you appear best to me
When viewed from the last point in your span!
[1] Tenzing Shepa, the first Nepali to climb the Mount Everest in 1953
[2] Roald Engelbregt Gravning Amundsen, a Norwegian explorer who was the first man to set his foot on the South Pole in 1911