Maxwell’s heavenly atoms are set in motion
He sees with his noble heart all his emotion
A bright mind ” Gin a body, meet a body! ”
Mingling planetary motion with his mystic philosophy.

Celestial atoms burst with their tether
Voyaging into inner space on gingerly feather
This flow of soul is mingled with a circuit
For electric current wobbles around the needle of his heartbeat.

” Gin a body , meet a body!”
Heavenly space coalesced into his Molecular philosophy
An electronic theory of light carrying a message of love
A radio receiver that flows with many Volt from above.

Maxwell’s genius is set into motion,
Like the atoms of his heart clinging together with his emotion
“Gin a body , meet a body” , his mathematical equation
A perpendecular line fusing into a wise intuition.

Rigid reason dissolves into a visionary feeling
Flow of the soul crystallizes into a soft morning
Maxwell in motion sees it all through his mystical eyes
Voyaging beyond Molecular Evolution where true wisdom lies. 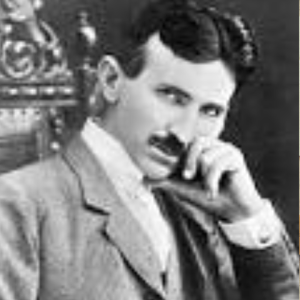 Tesla Saw It All

Tesla saw in electricity the true vision of light
His genius travelled beyond the speed of light
A seclusion which led to his inspiring thought
Under his spell thunder itself was strikingly caught.

Tesla was born in a day where lightning struck
Physicists were stunned by his creative track
All came to him in a vision when he was a child
Devastated by the death of a brother the source of his pride.

He was still unseen by others he stood alone
Generating electrical power from the rib of a stone
Tesla is a Toiler of light obsessed by numbers
He saw a lot of energy while others did still stumble.

His genius transcended by far that of Einstein
As a mystic man nestled in His holy shrine
His love for electricity pushed him to see the light
Going beyond the day of his birth where lightning hit so bright.

Edison himself was envious of his unique genius
Alternating Current surging from Planet Venus
An unprecented beauty of intellect and mind that saw it all
A fluctuating source of energy was Tesla with his amazing rise and fall.

He harnessed electricity thanks to a vision of Niagara falls
His prophetic visions transcended by far the gushing waterfalls
He knew before Eintein about the interchangeability of energy and matter
Tesla saw it all into the mystery of water.

A telepathy of souls that attracted kindle spirits together
Beyond time and space they are flying with their winged feathers
Like two eagles transcending the boundaries of time
Tesla’s laden ship united them in this perfect rhyme.

One thought on “Poems by Jenayah Hela Tekali”