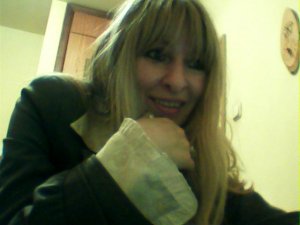 Poems by Tatjana Dan Rakić
READING THE UNFINISHED LIBRETTO
The black-winged night in its lust play with the wind,
laid a silver egg…
Eros came out of phantasm,
he moved the world from the standstill.
As the Golden-Winged god, with his all four heads
knew the hawthorn tree by flash of light,
Rhea, the oracle, would sit in front of the cave,
forcefully hitting the drum of bronze.
Then the bees would stop swarming
in wrong places.
Phanes, the buzzing bee of haven,
recognized the sweetness of the dome,
the beehive, revealed the lovely wild fruit
as plum’s soul mate with a worm,
bleeding.
The herald, missing the complete scene,
took back his words with dignity.
Being silent, he prevented exaggeration,
as once we were all but a sweet acorn
and death was not graver to us than a dream.
THE CALLIGRAPHER AND THE SYNCOPATION
The saxophone’s talk is so demanding, sweet and wild,
while the vibratory keys don’t fade with a storm
and open-hearted delight.
If it would recklessly sailed to the Isle
of the Blessed, dreaming in the boat without a paddle,
the segment of the sensual but absent
would come true,
nostalgically, intimately, like on a tea party,
the sigh of the jazz trumpet would grow with syncopation,
carrying wonder and the offspring of snooze.
However, the calligrapher would spread out the already open
window, while the pedestal, accomplished, would be left
behind it
in its own dispersion.
CALMNESS, OUT, OUT
Quite naturally, if one would cut off
water by a rope, if one would leave a She-Butterfly
on boards, to tremble for a moment or two…
Look – the confused one,
how she puzzlingly designs a silk,
gliding, sailing amongst thoughts,
soaking as being in the rain.
Can you sense a pleasure, truer
than sincerity, pleasure of trembling
without insult, or, or…
You know that you are thirsty?
How about waking up?
For a drink, try anis with milk. Realistically
and opposite of that. Light up, listen
until consciousness evaluates the dualism of the scene.
EARTH’S GRAVITATION
Tired of Earth’s force of attractiveness.
Today gravity is somehow getting
stronger, because of disproportion
of my ups and downs.
I was trying to arrange my power
properly, on the way
to the goal. Before I was too late.
I was moving through time.
I was waiting.
I suspected Chronos.
The last minutes
lasted the longest.
Along the way, I met myself
coming back from you.
Translated from Serbian by Viktor Radun Teon