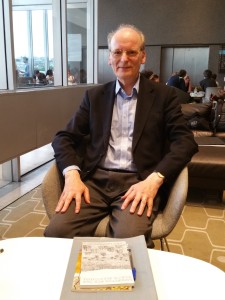 Neil Leadbeater is an author, editor, essayist, poet and critic living in Edinburgh, Scotland. His short stories, articles and poems have been published widely in anthologies and journals both at home and abroad. His books include Hoarding Conkers at Hailes Abbey (Littoral Press, 2010), Librettos for the Black Madonna (White Adder Press, 2011); The Worcester Fragments (Original Plus, 2013); The Loveliest Vein of Our Lives (Poetry Space, 2014), Sleeve Notes (editura pim, Iaşi, Romania, 2016), Finding the River Horse (Littoral Press, 2017) and Penn Fields (Littoral Press, 2019).He is a regular reviewer for several journals including Galatea Resurrects (A Poetry Engagement) (USA, The Halo Halo Review (USA), Contemporary Literary Review India (India), and Write Out Loud (UK).  His work has been translated into French, Dutch, Romanian, Spanish and Swedish.

Collapsible Chairs
lie in confinement, arms folded, without complaint.
They are not like other chairs.
Uprights are so stand-offish. Unbending,
they leave no room for manoeuvre,
are too uptight for comfort. Collapsibles
are flexible, they bend their joints
into submission,
are accommodating to strangers,
can be taken anywhere.
They withstand the weight of argument
without caving in.
This Poem Contains Flash Photography
The paparazzi freeze you.
A girl’s pendant catches the sun.
For a second it nearly blinds you.
You look away
and then look back:
it’s here you court
the most difficult thing –
publicity.
Nightscape: São Paulo
At the Frei Caneca Dance Club
when you sashay with Lucille
light as woodwinds
girl-to-girl
you are the wild card at the party
who holds together
in the one chord
notes that suddenly sing.
Old Man Running
Running in Rio he’s never short of a good view. Barefoot on sand
to the sound of waves. Or in and out of floodlit trees
Leblon to Ipanema
Days in his youth he’d sprint down paths of imperial palms
as if he were chasing rainbows
or keep up a running commentary on ships that were leaving the Bay
because seeing the alchemy of industry made him appreciate all the more
common objects at home;
broadcast descriptions of Sugar Loaf Mountain, everything pushing
with an equal force: hard stone, friction of road, driving him upward,
propelling him on: the immense flexion of lower limbs
each answering to the other’s call, one foot moving in front of the other
with the body in forward lean –
but now he’s slowing his tired limbs
quickly rehearsing a kind of
festina lente
He knows from those who have gone before
how stride length can be critical; how arms give lift with the hands
uncapped
to the higher velocities of running
is running on empty; out of breath
but not yet time expired.
Neil Leadbeater
Edinburgh, Scotland.