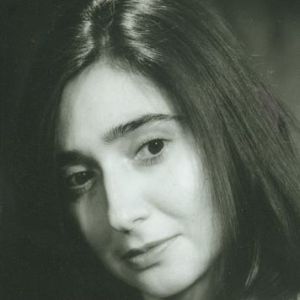 Aristea Papalexandrou (Greece)
Aristea Papalexandrou was born in Hamburg in 1970. She has published five books of poetry: Dio onira prin (Two Dreams Ago, 2000), Allote allou (Once, Elsewhere, 2004), Odika ptina (Songbirds, 2008), Ypogeios (Underground, 2012), Mas propserna (It’s Passing Us By, 2015). She has studied music and Medieval and Modern Greek Literature. She works as an editor. For her last book, It’s Passing Us By, she had honored by the Academy of Athens, in December 2017.
Athens / Greece
e-mail: aristipapal@yahoo.gr
BAL MASQUÉ
Et alors dans la banquise des fêtes
nos cœurs se sont glacés
Les esprits nous ont fait cadeau
de masques du nouvel an
pour que commence une nouvelle vie
Je les ai vus empilés sur les marches
J’en ai choisi un tape-à-l’oeil
beau visage blanc
regard bleu-vert
d’après mes non-souvenirs
Quand je l’ai mis est apparu
devant moi un autre monde
J’ai senti infiniment douce
la peau de mes absents
Cortège sans fin
de masques tristes
d’une autre vie ancienne
lares lumineux
Même si ce fut très court
je n’ai pas regretté
Et même si l’obscurité
de nouveau est retombée si lourde
Il restera plus précieux
que ta chair et que toi-même
ce masque par moi choisi
pour t’étudier
en vitesse et en douce
avant de te quitter
à jamais.
Traduit par Michel Volkovitch
THE FUGITIVE**
(Stadiou St.)
I know this stranger By the light spread by her black dress
I should put it the other way round it’s she who knows me I feel like she’s been following me since the time when gasping I wandered about the city And I heard as if from afar her silence in my ear:
“Speechless rival slip into Stadiou swiftly”
I the speechless rival
And it rises before me
Lovely this youthful silence
It knows me and I know it
I and her
fleshless
in my black dress
As if she wants to tell me something Consuming me to feed me Sweetly permeating my being
I feed her and she feeds me.
Translated by Philip Ramp
EYEWITNESS
Locked in
his white shirt
there are some twilight moments
when he flashes before my eyes
is lost, you’d think erased
before he nods at me
that he’d left
he’s leaving
The little I know about him is inconsistent
He’s not from here
and is not in any sense important
But he does have a way of being convincing
Trustworthy stranger; they chose him
to breach the promise of another
True man of borrowed
guilt
Perhaps he would like to
have spoken himself about
that night
About the others’ alibi
All he saw as hew s passing by
coming
infiltrating their steps
The mute human
commanding me to articulate
voice.
Translated by Philip Ramp
AB INDIVISIO
(Haunted on Pelion)
This summer did not turn out
to be inhabitable for anyone
As for this week
of meetings
it flushed away ravenous
emotions
Twisting road
scorching
sliding toward infinity
dogs smeared on the
asphalt
hard to think about water
hard to breathe
And when wan you come
face to face
with the first haunted dwellings
vacant for years
they all cry out to you
to unlock
The sea, the sea
Unlock the sea
Two-story three-story
empty in a wasteland
Door nowhere to be found
and the key broken
The sea
Otherwise it will dry you up
Two-story three-story
Not one inhabitable
a place to live and share
the coming summer
The sea, the sea
a once upon a time Pelion
paradise in full flower
The sea from afar
The coming summer no one will
find anything inhabitable.
Translated by Philip Ramp
TO ONESELF
Above all else feeling is
high
Not to say there weren’t moments
that straightaway made you blanch
Aristi(2)
Leave your paleness
empty in first class
But the train even though it’s gone by
will be passing through again
No, it won’t be coming for you
it’s simply what it does
Whoever has stood under a shelter has
perhaps
been locked into his life
— a few dozen kilometers
of suffocation –
Up to there
the infinity
of your living moments
All the creatures of earth
as free as possible
You too as free
and not pressured to support
yourself by your writing
Neither your life
nor you death is saved
by your unwritten verses.
Above all else feeling is
high
and this poem is endless
and this is yours.
———
2. “Aristi”, is a version of the poet’s name: Aristea, which in addition to being
a names means superior, excellent, distinguished. Both forms can be
used as women’s names.